Food Across the World

We can talk about travel and adventure. About world tour, about culture. About languages, about monuments. We’re all different on these matters. Everyone has their own vision and interests. But there is one topic that all people on Earth share one common passion for and go completely crazy about: food.

How do people from the other side of the planet eat? What are our close and distant neighbours’ food traditions? That’s a subject we have discussed during one of our “Papotes”, our weekly online conversation tables, every Tuesday at 5 PM in Spanish, and every Wednesday at 5 PM in English! 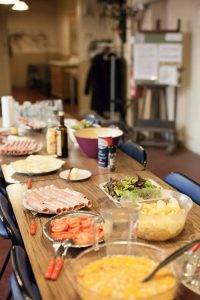 Don’t miss our point here: when we say “food traditions”, we’re not talking about French baguette, British Christmas pudding, Spanish paella, or any typical dish that everybody already knows. With the participants of the conversation tables, we chatted and played games to discover together some peculiar fun facts about different countries’ food culture. Did you know for example that Columbian people in movie theatres do not only eat popcorn but also something rather… unusual? Want to know what it is? Okay, watch this authentic re-enactment: “Hello Sir, may we have two tickets for Frozen 2 and one medium bucket of toasted ants, please?” Surprising, isn’t it? What do you say? “Peculiar”? Told you so. And yet, that’s real. And if it seems ludicrous to you, don’t forget that what is strange for you can be someone else’s norm. It all depends on your frame of reference. There’s probably at least one typical food from your country that the rest of the world can’t even think of eating.

And that was just one tiny sample of the great food diversity that exists on this Earth! Let’s take another example. Have you ever tried balut? Imagine a duck egg. All clean and beautiful. Now imagine it fertilised and incubated for about 20 days so that the duckling foetus inside is already formed. Can you picture that mentally? Alright, last step: now imagine you swallow it up. If you have felt a slight gastric discomfort while reading this sentence, it is normal. And yet, this is quite a popular snack in Philippines and in some regions of China, Vietnam, and Cambodia. And once again: this is not about discussing what is normal and what is not. Every country has its own food culture.

Still hungry for more? No? Okay, then we’ll spare you the Scottish haggis made with sheep lungs and hearts, the Ohio pig brain sandwich, and – yes, you’re right, let’s leave it at that.

Of course, during our conversation tables, our goal is not to disgust each other (not only)! Did you know for instance that in 2001 Pizza Hut became the first company ever to deliver a pizza… into space? That’s right. They spent one million dollars to send a pizza to astronauts in the International Space Station. That’s what we call a surprising food fact. One more example: did you also know that the country that consumes most tea per person is… Turkey? Despite what our stereotypes about Brits could make us expect. 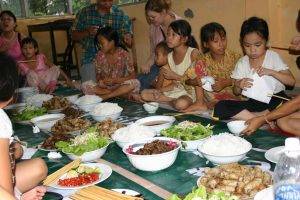 In short, food culture in the world is incredibly diverse. There are probably many more food traditions than you think, and the best way to discover them is to travel! So, go and check our website to learn more about our volunteering projects and language stays abroad!

And if you want to join us and talk about nice topics like balut and cinema ants (we talk about plenty of other things, don’t be afraid), sign up for our conversation tables! We look forward to seeing you there! ?