You want to start learning a new language, but you don’t know which one to choose? You’d like to know which is the one for you? The one that will become your most faithful friend on your foreign adventures? Many criteria come into play!

That is why, to help you sort things out, we’ll try to describe some of the main language families spoken in Europe (to begin with), their main features, their history, and even a bit of geography (it can’t hurt). And today’s the turn of Slavic languages! 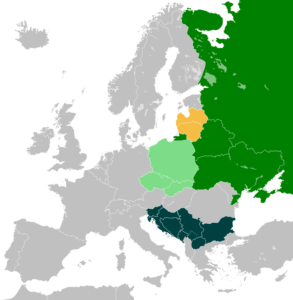 Let’s begin with Latvian and Lithuanian, that most people assume to be Slavic languages, but that actually belong the Baltic family. The reason for this confusion is that they are part of the larger Balto-Slavic language family. A beautiful and happy family with many children. Their Slavic cousins (those we are interested in today) are divided into three main categories: Western, Southern, and Eastern Slavic languages.

Western Slavic languages are written with the Latin alphabet. The four main ones are Polish, Czech, Slovak, and Moravian. The three latter are very similar, and their speakers can even understand each other quite easily. Isn’t that wonderful?

There are three main Southern Slavic languages: Slovenian, Serbo-Croatian, and Bulgarian. Each of these three can actually be considered as a whole family that can be subdivided into several related variations. Some of them are written with the Latin alphabet, while others use the Cyrillic script.

Finally, Eastern Slavic languages consist of Russian, Belarussian and Ukrainian. Not only is Russian widely spoken in Ukraine, but it is also prominent in Belarus, where the Belarussian language is actually very uncommonly used (mostly in the countryside). These languages are written with the Cyrillic script.

How you feeling so far? Still holding up? Okay, let’s keep going. What’s so special about Slavic languages, huh? Besides the fact that they’re spoken by 315 million people across the world. Well, generally, most of them are mutually intelligible. It doesn’t mean that all of their speakers can fully understand each other, but rather that they can get by to communicate more or less precisely (depending on the language combination).

Also, Slavic languages differ from most other languages by featuring cases. And if you’ve ever studied German or Latin in school, you know what I’m talking about… okay, stop running away. Cases and declensions often scare new learners away because they look complicated. But in reality, they make sentences much simpler, as the word order gets much more flexible.

Another particularity is the fact that these languages have no definite or indefinite article. That means there is no difference between “the dog” and “a dog”. The context is usually enough to understand. So? Makes things easier, doesn’t it?

One last example? Slavic languages are known for featuring very few tenses! No future tense in Russian, for instance. Once again, context is everything! Take a look at this English sentence: “I’m going to the beach tomorrow.” It’s in the present tense, and yet you know it’s a future action.

So, what do you say? Convinced? Is there one Slavic language you’re more interested in than others? If you do feel like studying Russian, find information about our online classes and our great teachers by clicking here!

Other language families will be dealt with in coming articles. Follow us on social media to make sure you won’t miss anything out!